FTC Disclosure: Fishpondinfo contains affiliate links, and, if you click on such a link and make a purchase, and I meet their minimal requirements, then I will be compensated. 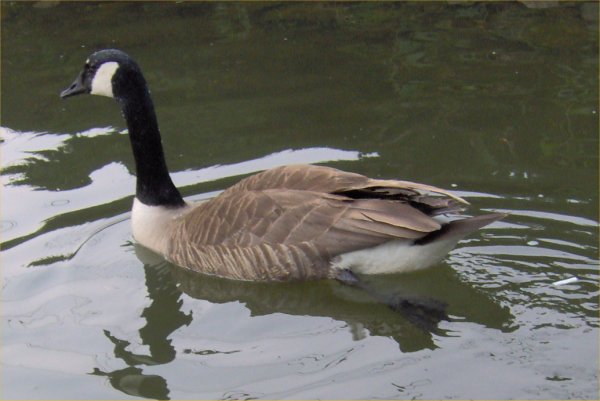 Also, check out the page on ponds for waterfowl.

Herons and egrets can be found on this page.

I started renovating my bird pages in October of 2006. By July 2007, it was obvious they were not going to be finished if I added all the new information to the pages that I had initially intended. In order to get what I have written linked into the pages, I decided to just note which pages were unfinished and link them all in. This is one of those pages that is not complete. I am sorry.

Arey took a lot of photos of (what I consider) rare ducks, geese, and swans. Go to his page to see those photos.

Large ponds are for ducks. Little water gardens or fish ponds are not places for ducks. Ducks will eat all the plants in a pond fast and leave feces all over. This creates havoc on the nitrogen cycle. Deterrents are similar to those for herons above. Ducks usually will only alight on ponds large enough for them to take off from (they need a running start). I love ducks, but not in my little pond. No ducks have landed on our property as of yet. Ducks mostly eat submerged, floating, and emergent aquatic vegetation including things like anacharis, cattails, sweet flag, and duckweed (named because ducks like to eat it). They will eat aquatic animals incidently while feeding. Ducks will also eat grasses and grains on land and rarely turn down most grain-based human foods offered to them. We used to feed bread to ducks at a local park. Such feeding is now illegal as it encourages the ducks to stay around and leave excrement on the lawns (that of course, must only be used for humans), and some ducks become less willing to wait for their turn and chase people around or nip at them. Natural foods are also healthier for the ducks.

I corresponded with one pond-keeper in the spring of 2003 about ducks. His fish were being eaten and torn up. He did not know who to suspect until he saw the ducks with goldfish in their mouths! So, sometimes certain ducks will eat fish. As I told him, they will not turn down a "free" meal.

A few more ducks came to our pool cover on 6/8/05, this time two male mallards. Here is the photo.

A pair of mallard ducks landed on our pool cover on 3/27/05: photo of mallards.

I took these two photos of three ducks swimming in a kiddie pool at the local county fair on 8/8/07. I think they are two mallards and a black duck but am not sure.
Three ducks
Three ducks

We went back to DC the next year and this pair of mallards was at the Tidal Basin.
Pair of mallard ducks on 4/8/10.

Photos of other people's ducks:

Photos are listed from oldest to newest.

I took this photo of a gorgeous duck at the zoo on 6/7/06 as well as a pair of mallards.
Blue-billed duck
Mallard ducks - male top, female bottom

This photo is from Dutch Wonderland on 6/19/07.
Ducks by one of the streams. I am not sure if they are mallard ducks or not.

On 9/14/07, we went to the National Zoo, and I took these duck photos:
Ducks by their pond
Duck bathing - this fancy duck (sorry, I did not write down the name) in the indoor exhibit was bathing.
Male Mandarin duck - gorgeous!

On 11/9/07, we went to the Catoctin zoo. See this page for more information. Here are the photos and video from that page with ducks:
Ducks - mostly mallards
Two very noisy white Chinese geese and some mallards
Geese and ducks
Video! - 1168 KB, mpg movie of the ducks and geese.

On 1/21/08, Sarah sent two new photos of her now adult male ducks. Unfortunately, soon after, she had to send them to a farm where they soon died probably from exposure to an avian virus.
Duck
Two Ducks

Three Fancy Ducks at the Maryland Zoo on 8/19/10. Two of one unknown species and one of another species are present.

From the Washington, D.C. zoo on 10/2/11:
Mallard ducks
Mandarin ducks

Geese and ponds relate as ducks and ponds except that geese are bigger, eat more, and poop more. They also can be quite nasty. Nonetheless, they are among my favorite to have in very large ponds. In Maryland, most geese are Canada geese. Some are resident year-round and can cause damage to crops and lawns as they feed. Others are migratory. A pair of Canada geese with a nest will defend it strongly so human visitors are not welcome at that time. Geese usually do not visit small ornamental ponds. They will eat aquatic vegetation as well as land plants including grass and grains. Because they can eat on land, they will often wander away from water. In the summer of 2001, I saw a pair of Canada geese with about eight young goslings (baby geese) in a field next to a major road. They were half a mile from the pond from which I assumed they came.

I took this photo at the zoo on 6/7/06. I do not know for sure what species these geese are.
African (or maybe Chinese) geese

This photo is from Dutch Wonderland on 6/19/07.
A Canada goose following our log boat at the "Dragon's Lair" ride

On 11/9/07, we went to the Catoctin zoo. See this page for more information. Here are the photos and video from that page with geese:
Bar-headed goose - this bird was gorgeous.
Bar-headed goose
Two very noisy white Chinese geese and some mallards
Bar-headed goose
Geese and ducks
Video! - 1168 KB, mpg movie of the ducks and geese.
A one-legged goose

We went back to the Catoctin zoo on 5/21/08 (free passes after it rained last time). I got these two photos of Canada geese with their goslings. I would guess they were about a month old.:
Goslings
Goslings

On 6/15/09, Jon sent this nice photo of a pair of Canada geese and their goslings:
Canada goose family

Ten Canada geese and two ducks (probably mallards) at sunset on the water in Zoo America (attached to Hershey Park) on 8/27/10.

Swans are again like ducks and geese but yet even bigger. Swans can be aggressive at times. They are quite gorgeous though. If I ever had a large pond, I would love to have some. Only a few species live in North America, and their numbers have been severely depleted by loss of habitat. The mute swan, Cygnus olor, is from Europe and considered a pest in some parts of the United States. It has orange and black on its beak while the others have only black. The tundra or whistling swan, Cygnus columbianus, is native to the Northeastern United States. The rare trumpeter swan, Cygnus buccinator is native to the middle of the United States.

Certain people want to slaughter the mute swans in Maryland claiming that they are harming the environment. In fact, it is the activities of humans and their pollution that are killing the bay. See this mute swan fact sheet for why mute swans are just a scapegoat for pollution and an excuse for certain humans to murder more animals.

I do not know if they really quality as waterfowl but I have a few photos of cormorants from the zoo.

I will write more on these fishing birds later but added this section so I had a place to post these photos from the zoo taken on 6/7/06.
Cormorants waiting to be fed
Cormorants drying their wings

I also took a video of them drying their wings. Go to the video page to see it.

See Arey's page under 8/29/10 for a few photos of groups of cormorants under the water.